A Review of ‘Pibhare Rama Rasam’

‘Pibhare Rama Rasam’ is a noteworthy song composed by the saint and composer, Sadhashiva Brahmendra. He was an illustrious Advaita philosopher who was born to a scholar, Somasundaram Avadhani and Parvathy Ammal. His early life was spent in Tiruvisai-nallur.  His parents had named him Shiva Rama Krishna. He completed his education under the tutelage of the eminent Guru, Rama Bhadra Dhikshithar who also hailed from Tiruvisai-nallur.

After his education, his parents got him married at a very early age. But Shiva Rama Krishna was not interested in worldly life. He soon left his home never to return. When he was roaming aimlessly in the woods near Tiruvisai-nallur, he met his Guru, Sri Paramashivendra Saraswathi. Swamiji initiated Shivarama into sanyasa and named him Sadashiva Brahmendra.

On one occasion, the young Sadhashiva was chirping away incessantly, and his Guru chided him asking when he would stop talking. Sadhashiva displayed implicit obedience to his Guru, and from that moment onwards he stopped talking. Hence, he was known as a Mauna Muni, as he never uttered a word for several decades after that. Sadhashiva Brahmendra was eulogized as an avadhutha.

An Avadhutha is one who gives his insight to others and teaches them about the true nature of Ultimate Reality (Brahman), and Self (Atman). He was a luminary who assumed the role of a guru and showed the path of Moksha (Liberation of the soul) to others. He was a Jeevan Mukta (A renounced one) who roamed in the wilderness, not heeding the scorching sun, lashing rains or chilly winds. He was always in a supreme intoxicated blissful state. He is also lauded for his sacred Advaita text, ‘Atma Vidya Vilasa.’ Sri Sadhashiva Brahmendra’s adhishtanam where he attained jeeva samadhi is at Nerur near Karur.

Sadhashiva Brahmendra is a celebrated composer of several sublime Krithi-s (Songs). Only a precious few of them have survived which are revered as great compositions of Carnatic music. Some of his transcendental compositions are, ‘Pibare Rama Rasam,’ ‘Bhajare Raghuveeram,’ ‘Cheta Sri Ramam,’ extolling Shri Rama. The songs, ‘Gayathi Vanamali,’ ‘Bhajare Yedhunatham,’ ‘Bhajare Gopalam,’ and ‘Bruhimukundeti,’ idolize Shri Krishna. ‘Manasa Sanchararey’ is another acclaimed composition on Brahman.

The in-depth meaning of the song, ‘Pibare Rama Rasam,’ has mesmerized the rasika-s. In the Pallavi (The opening stanza), he urges the devotees to savor the elixir of Rama rasam, the name of Rama.

Rama naamam keeps one far from sins (Paataka) and from the people who induce others to commit sins (Dushkrita). It gives fruits in abundance. In this context, it means that it will bestow (Nana vidha) many kinds and types of rewards (Phala).

This name dispels (Viduram) fear (Bhaya) and sorrow (Shoka) that are attached to the cycle of birth and death (Janana marana). It is the very essence (Saaram) of all (Sakala) the religious scriptures including the Vedas (Nigama) and sciences (Agama)

The Rama namam protects (Paripalitha) the entire creation. Lord Brahma was born of a lotus which bloomed from the navel of Lord Vishnu. Hence, Vishnu is known as Padmanaabha. Padma means lotus and Naabhi means navel. After Lord Brahma was born, he created the entire universe. This line infers that chanting the name of Lord Rama protects the whole universe. This name cleanses (Pavitri) even the most heinous sins (Paashaandam).

Rama Naamam is paralleled as the pure (Shuddha) song (Geetham), which the poet Paramahamsa has taken refuge in (Ashrama). It is the same name which has been drunk (Peetham) by great sages like Shuka, Shounaka and Koushika.

This composition was popularized by the Maestro, Balamurali Krishna, in the Raaga, Ahir Bhairavi. Unni Krishnan’s rendition is also adored by rasika-s. Ahir Bhairavi is a Hindustani raaga. It is a morning raaga sung around 6am to 9am. This raaga has a tinge of sadness, sprinkled with pity and has an imploring tone to it. It can immerse the listeners in bhakti bhava. The equivalent of this raaga is known as Chakravaham in Carnatic music. Muthu Swami Dhikshitar called this raaga Vegavahini and has composed many krithi-s in this raaga.

The popular Hindi movie songs in this raaga are, ‘Albela Sajan Aayo Re’ (Hum Dil De Chuke Sanam), ‘Ram Teri Ganga Maili’ and ‘Solah Baras Ki' (Ek Duje Ke Liye). One can feel the sense of yearning in all these songs. The popular Tamil songs based on this raaga are ‘Vanithamani’ (Vikram), ‘Vaanile Thenilaa’ (Kaakki Sattai) and ‘Nee Paadhi Naan Paadhi’ (Keladi Kanmani). And the iconic song, ‘Ullathil Nalla Ullam,’ in the movie, ‘Karnan,’ melts the listeners’ hearts and also moistens their eyes. Sirkazhi Govindarajan has rendered this song in the most heart-warming manner.

Let us listen to ‘Pibhare Rama Rasam' and dive into the ocean of nectar called the Rama naamam, and get transported to an empyreal world wherein we become one with Lord Rama. 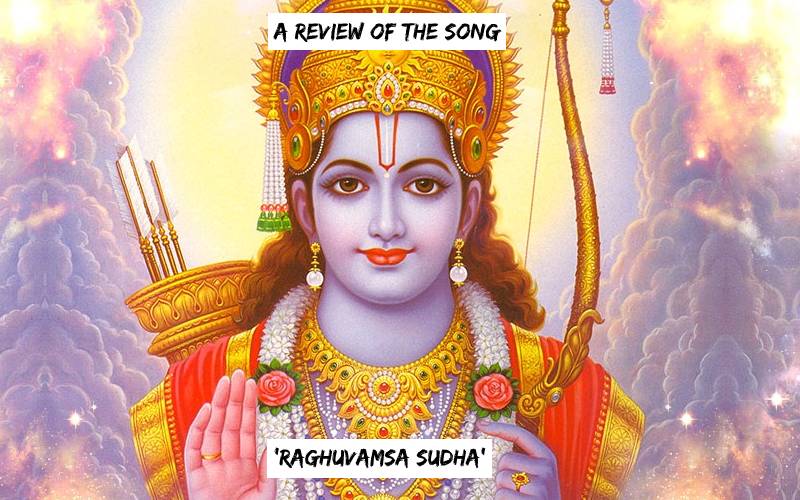 GEET
A Review of the Song – ‘Raghuvamsa Sudha’

‘Raghuvamsa Sudha’ is an appealing song composed by the illustrious composer Patnam Subramania Iyer. He was born in 1845 in Thiruvaiyaaru, in the Than...