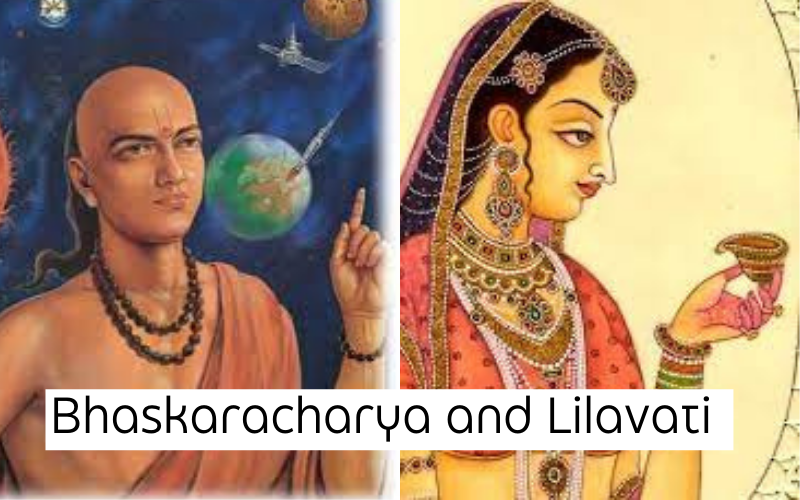 Bhaskaracharya II (1114-1185), a great mathematician as well as a skillful astronomer was born in Karnataka and has made immense contribution to the fields of arithmetic, algebra, trigonometry, calculus and astronomy.  His works are known for their systemization and use of improved methods. Bhaskaracharya’s magnum opus, ‘Siddhanta Shiromani,’ is divided into 4 parts, ‘Lilavati,’ ‘Bijaganita,’ ‘Grahaganita,’ and ‘Goladhyaya.’

While ‘Lilavati’ deals with calculations, progressions and permutation, ‘Bijaganita’ deals with algebra, ‘Grahaganita’ with planetology and ‘Goladhyaya’ with the study of the spheres.

This article is about the first part of his book, ‘Lilavati’. The mathematical formulae and the puzzles of Bhaskaracharya will be understood only by mathematicians. But the legend behind the name Lilavati is quite interesting.

Bhaskaracharya II had a beautiful and intelligent daughter named Lilavati. She was the apple of his eye and he had great hopes for her future. Being an astrologer himself, he eagerly studied his daughter’s horoscope to know what the future held for her. What he saw shocked and upset him. He could clearly see that Lilavati would remain single and childless.

A girl remaining unmarried was unheard of those days. It was considered a fate worse than death. Bhaskaracharya decided to take a risk and get his daughter married during a wonderfully auspicious muhurta. He looked for a suitable groom and made all arrangements. Those were the days, when there were no clocks. So, to make sure that he knew the exact time when the auspicious muhurta occurred, he made a hole in an empty cup and let it float in a vessel filled with water. As the water slowly entered the cup through the hole, the cup would become full and sink. The minute the cup sank, the wedding would be conducted.

After making all these arrangements, Bhaskaracharya warned the girls not to go near the place where the cup and water were kept. The usually obedient Lilavati could not contain her curiosity that day. She wanted to see exactly when the cup sank and went near the water and peered into it. As she bent over the vessel, without her knowledge, a tiny pearl from her bridal dress (some say, it was from her nose ring) fell into the cup and blocked the hole. And so, the cup never became full and never sank. The auspicious time passed by, but none knew about it. Bhaskaracharya was greatly upset. The wedding was conducted anyway, but very soon, Lilavati’s husband died.

Bhaskaracharya was devastated. Lilavati became inconsolable. She was also guilty because the muhurta could not be noticed because of her.

After a few days, Bhaskaracharya said, “My child! It is immensely sad that you have lost your husband. But how long will you be grieving over your loss? You have to get over this and try to lead a normal life.”

Lilavati said, “Yes, father! What you are saying is true. But I don’t know what to do. The thought of my loss keeps coming back to my mind and I am not able to focus on anything.”

Bhaskaracharya decided to find a way to wean his daughter out of her grief.

One day, Bhaskaracharya had an idea. He knew that his daughter had a sharp intellect. He posed a mathematical puzzle to her and said, “Lilavati! Why don’t you solve this problem? You have always been interested in solving problems. Take it as a challenge and do it.”

Lilavati agreed immediately. As she got involved in solving the problem, she was totally drawn into it. She felt jubilant when she solved it. The dejection and depression disappeared magically. It was as if she was born again. Life became interesting and filled with possibilities.

Bhaskaracharya was quite proficient in Sanskrit. He could write poems effortlessly. He thought of new problems every day and set them in the form of verses that were rich in lyrical beauty. He gave his daughter complex problems which are now resolved using the Pythagoras theorem. Lilavati looked forward to the challenge posed by each of those problems. In time, she became adept at solving difficult and complex problems.

Bhaskaracharya collected all those problems he had created for his daughter and arranged them into thirteen chapters. He named this work Lilavati, after his beloved daughter.

Thus, a treatise on mathematics, got the name of a girl.

Points to notice and remember:

1. Of a group of elephants, half and one third of the half went into a cave, one sixth and one seventh of one sixth was drinking water from a river. One eight and one ninth of one eighth were sporting in a pond full of lotuses. The lover king of the elephants was leading three female elephants; how many elephants were there in the flock?

2. Oh! You, auspicious girl with the enchanting eyes of a fawn, Lilavati, if you have well understood the above methods of multiplication, tell me what is the product of 135 and 12? Also, tell me what number you will obtain when the product is divided by 12.

If any of you have the courage and confidence, try solving these problems.