Around the world, a human civilisation evolved over thousands of centuries ago on an undesigned pattern but their understanding of nature and by its forces paved actions shaped their desirous and quests. The laws of nature were the first instrument to form their quests to understand the reasons for human evolution and embarked on various dimensions like culture, social norms, and economic prosperity.

Since then, the human civilisation continues to make attempts to progress further on cultural values, shared social norms, and materials accumulation through trade. Whilst, we tend to track back the origins of human civilisation along with their pattern and endurance of culture, social milieus, and economic status giving importance as much as the future.

Since time immemorial, human civilisation seems to be pursued to inquire about the evolution of the cosmos, man, and desires in life. It so happens that many things that evolved around the man and his community were always quite spontaneous combining the collective behaviour of a group of people or a community. Some of the basic aspects are like desires of pleasures, languages, desire to accumulate materials, cultivate norms and values for social virtues including culture, etc. As we look back from the perspective of the twenty-first century; several centuries ago, man paved and nourished many facets of sobering endurances of culture which penetrates among the community and individual practices in daily life. The most inevitable aspect of any culture across the world is keeping oneself cleanly in body, dressed up with clothes, etc.

According to a great scholar, C.Rajagopalachari “civilisation in the true sense of the word is the development of restraint. The consensus of society, the total combined will of the people living together, seeks to curb the individual’s tendency to overdo the use of his senses. This is the difference between civilisation and barbarism.”

The word culture denotes many things to many countries. But undoubtedly, it is one of the most misused and abused words in every literature. The word culture is also most confused among people during the debate and discussions in the domain of politics, administrations, social reforms, renaissance, etc. Chakravarti Rajagopalachari (1878-1972) was one of the greatest scholars of twentieth-century India. He was a multifaceted personality. He was a visionary and thinker. He ventured into many fields and excelled at great depth, like a legal and constitutional expert, freedom fighter and astute politician, a scholar in Indian literature, classical liberal thinker, statesman, an able administrator, scholar in Tamil literature, prolific writer, and author of hundreds of books, etc.

He was fondly called as Rajaji or C.R. by many. He was among few scholars who applied their mind into deep musing about what is culture not just in India but also of the other nations and how it evolves around the people’s social and economic progress. In the late 1950s, Rajaji was invited by Bharatiya Vidya Bhavan, Mumbai to deliver a series of lectures on Culture. The Bhavan later published the lectures in a slim book which went several editions over the years since then.

Rajaji was a principled man and hesitated to give lectures on Culture. Though he has mastered and written quite copiously on Indian literature and knew world history, philosophy, and culture. He warned, however, that “nothing can be expected from me on music, dance, the theatre or the silver screen” which were and still considered as the culture but these alone did not describe Rajaji. He spoke about the process of evolution of the culture of different nations and the case of India. He succinctly asked “how to utilise the traditional position to the best advantage for the general community, Shall we try to enforce the obligation on the individual in respect of the entire whole and reconcile ourselves to lapses and failures? Or Shall we utilise the natural force actually prevailing in smaller circles and add it all upto make it serve the whole?”

According to Rajaji “the way of living built up by groups of human beings and transmitted from one generation to another. People each with their own long history build up separate patterns of cultures. There is much that is common, but also a great deal that is particular to each nation.” Further, “culture is not literacy or ability to play on the veena” said Rajaji, but “it has to do with general behaviour, speech, and conduct, and is different from goodness and badness of character." Think about behaviour of political leaders in contemporary India. Also, think about behaviour of spiritual leaders across different faiths, the goodness and badness would vividly expose their character and their culture.

Unlike our confused textbooks in schools and colleges, Rajaji defines that “culture is not just character or morality. Character is the inside of a man. Culture is external rather than internal. Culture has more to do with behaviour and way of living than with character. Broadly speaking, culture is external though of course, it has much to do with character too. Because, the outside has always much to do with the inside.” In contrast, we tend to witness mostly in our public life wherein one conducts on a confused state of affairs of both character-wise and established morality of the culture. Most of the contemporary social ills have strong negative influences of distortions of cultural values of communities in different countries including India. Partly, the government system seems to be a vital force paving towards distortions of communities' culture which imposes restraints on an individual without force or completion. “Civilisation is not mere advance in technology and in the material aspects of life” warned Rajaji. “We should remember it is an abstract noun and indicates a state of living and not things. Mainly, civilisation connotes the curbing of wildness, barbarity, and over- indulgence of passions and appetites” observed Rajaji.

According to Rajaji “civilisation has two instruments to achieve the object of curbing the sensual instincts and preventing or deterring over-indulgence.” He explains that one instrument is the government's enforcement of the law through penal codes and other instruments, importantly, the “civilisation is culture which acts through family training, tradition, religious belief, literature, and education. Culture puts down over-indulgence acting as an internal force, as distinguished from penal laws which operate from outside. Where it fails, it acts, though social obloquy and in very bad cases, through social ostracism".

As witnessed time and again in contemporary society, Rajaji warned distortions of culture decades ago. He said that “government and laws use physical force and compel people to restrain themselves. Culture is a subtle instrument. It acts silently. It makes people feel they are not forced to obey, but do it of their own free will and gives them a sense of pride in good behaviour.” Therefore, he vividly defined that the true “culture is the habit of successful self-control; and that nothing that reduces self- control or which does not help self-control is culture”. 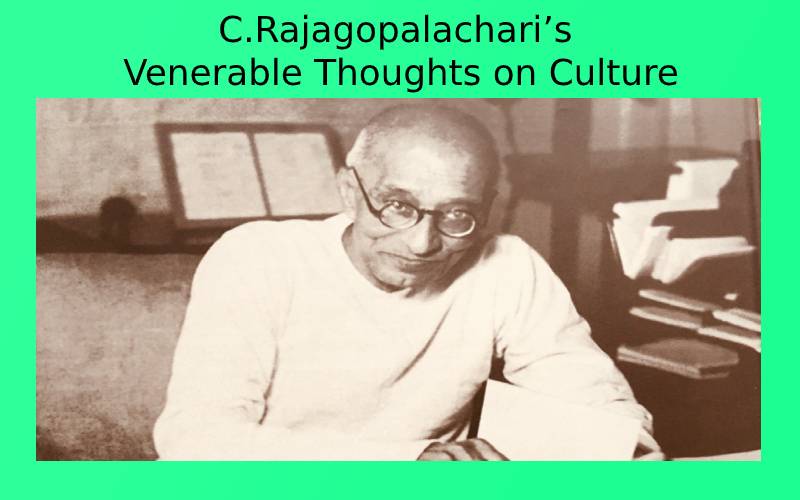 Irrespective of the social and economic development status of any community in India, we could sensibly relate to their cultural values practiced over several centuries and trace back the ills found among the same people and community with which contemporary India is striving with multiple challenges especially ills against women and the girl child. Over-indulgence on pleasure by some people is neither upholds the self-restraint nor keeps goodness of character both within their family and the community. This is a dangerous trend and India is now facing a furious frightening over culture.

Unlike other societies in the world, “Indian culture is predominantly self-restraint”. And it is largely believed as noted by Rajaji that “man attains completion only when culture is added to what he has acquired for fulfilling his wants for the physical body and for satisfying his thirst for knowledge”. Thus, Rajaji observed that “so far as India is concerned, where we find simplicity in the pattern of our culture, it is not mere stunted development, but deliberate preference for simplicity and a conscious rejection of the complicate life and multiplication of wants, this being consistent with the philosophy and ethical code of our people.”

The fierce battles waged against the Hindu culture or any other culture has to do with the character of goodness and badness. The welfare state alone cannot solve the social illness seen against women or men of varied faiths. This also applies to societies in western countries wherein the racial issues are at the flame of constant fire with either instigation or undermining particular culture. In the war against the supremacy of culture, the people tend to “forget the natural laws of propinquity and of emotions” said Rajaji. Soon after attaining independence, the leaders at the helm of affairs had gravely ignored the strength of civilisational culture in India, which aided for the development of humanity for centuries. Rajaji spoke more often that how human "life depends on property, contracts, and security of possessions. All this was managed by culture wherever and whenever there was no law in the Austinian sense…Culture not only made life fuller; but in India, during many long periods of anarchy, it did duty for kings and officers who vacated their posts.”

The first forty years of independent India proved that a path chosen for development without cultural nurturing would lead to economic disasters or social chaos. Rajaji believed that the adoption of western culture and modern ideas of education have done their best to caricature and stifle the Indian culture by substitution of materialism and selfishness for narrow life.

However, Rajaji had never lost his hope of reviving Indian culture and nourishing it for generations to come. He wrote copiously on major ancient literature of India and Tamil. He firmly observed that “from among our millions suddenly comes up someone who gives a new lease of life to religion and philosophy among our people.” Indian culture would aide for eternal boasting upon the progress of the peaceful social and economic development of all segments of people in years to come. Let’s not forgot that our behaviour is our culture. The writer, Chandrasekaran Balakrishnan. is economic historian and has widely published articles both in Tamil and English about forgotten great statesmen, scholars and national leaders. He also works in public policy. Previously, he had worked with the Union Planning Commission of India, academia, corporate bodies and reputed NGOs.

LEKHANAGALLU
Born to Serve the Nation!

On 4th September, 1880, a young boy was born in the Datta family of Simla in north Calcutta. He was the 3rd and youngest son of Biswanath Datta, an at... Yaoshang is Manipur’s own version of Holi – the festival of colours. It is a five-day long event that is observed on the full moon day of Lamda, the l...