Jaganathan and myself will be ever grateful to Padma Shri awardee Krishnakumar Varier of Arya Vaidya Pharmacy, Coimbatore. The noble gentleman introduced us to the Durga Bhagavathy Temple at Koduvayur ( Ethanur ). Both of us have been visiting this sacred shrine once in a while and we're lucky to attend the Kumbabishekham. It was a grand affair. The local team had done a wonderful job. They had even released a music video on the deity. I could observe the noble citizens of this region doing great things. It was impressive and has created an indelible impression in my mind.

Thanks to Durga Bhagavathy, it has been possible to visit Palakkad , the rice bowl of Kerala a couple of times. We met Rakesh Kesav and his friends at the Durga Bhagavathy Kumbabishekam. Rakesh and his friends enlightened us about the ERATTAKULANGARA DURGA BHAGAVATHY at Pulinelli in Palakkad district. We were told that the Temple was a must visit on a Monday and the thought should perhaps arise on a Thursday. It was Thursday that we came to know about it and therefore we decided to seek her grace on the following Monday. Jagan ( Jaganathan ) and myself traveled to Pulinelli early on Monday. It was a nice route. The shrine was situated in the midst of green paddy fields. These fields were encircled by different kinds of trees. The deity had moved from one spot to the other through the pools of water present in the quaint village. These neighboring pools made the Temple famous as the ' ERATTAKULANGARA DURGA BHAGAVATHY TEMPLE '. The deity Bhagavathy is self born or ' Swayambhu '. In all, we visited three temples. The first one was dedicated to Lord Shiva. It is said to be about 2000 years old. There are shrines for Lord Shiva, Vishnu and Lord Ganesha, Lord Subramanya and Nagaas under a tree. The dedicated priest helped us to offer prayers. The southern side is blessed with a shrine for Lord Ayyappa in the form of Sastha. He is found in the company of his consorts Poorna & Pushkala. The deities are in the form of three lingams. This shrine has some ancient sword-like sickles. All the festivals connected with this Bhagavathy begin and get completed in front of the Sastha shrine. The next important place to visit is the Kottukulangara Kavu. She is believed to be the sister of Erattakulathi and this deity is ever resident in the framework of five trees. The place is very aesthetic and devotees pray here in absolute silence. Erattakulangara Bhagavathy has a shrine here. However, it is believed that she moved to another place by vanishing in one pond and reappearing in the other. This shrine is found in a serene spot. Rakesh and his friends shared stories about the Temple and we understood that the power of Bhagavathy ensured that her shrine complex and dedicated devotees could do things in accordance with Dharma. The neighboring ancient looking houses, the lake and the cleanliness of the place were overwhelming. Govindan Unni of Koduvayur was sharing his knowledge about Temple restoration to the Pulinelli team. The information was flowing like a river. Rakesh and the rest of us moved to the Erattakulangara Bhagavathy Temple on the other side. A huge pond exists near the Temple and Bhagavathy had appeared here through the pond. The icon is self manifested. This Temple is endowed with a big RajaGopuram. A devotee had contributed towards the same. The shrines in this campus are open to the sky. Rudaramaala Bhadrakali had provided space for Bhagavathy and she is resident towards the right side of the main shrine. She is worshiped yearly once. Behind Bhagavathy but towards the west is placed Nambeesan. He had written poems on Bhagavathy and is her follower. This Temple has an oracle. The person who currently performs the role of the oracle is one Sankaran Kutty. He jumps into the pond during the pooja and performs the task as the oracle. He had accompanied us that day. There are several poojas in the temple. However, the experience post the Aikamatya Pushpanjali (pooja) was interesting. This pooja was said to bring married couples closer. I understood it otherwise by taking it to be a pooja ( prayer ) which will bring estranged couples together. But they told me that it makes even the intimate couples even closer. Therefore we booked for that pooja and Bhagavathy gave me a wonderful experience.

The Chatti Pooja is said to be very famous here. Food is offered in either 8 or 16 or 21 or 51 or 101 pots to Bhagavathy. Thereafter one out of eight pots is offered to the Jaladurga in the pond adjacent to the Temple. The deity is present as Jaladurga in the morning and Vanadurga in the evening hours. It was sight to see the priest throwing the pots of rice into the pond. It was kind of a discus throw. Well, now coming to the miracle the story connected with the Aikamatya Pushpanjali. While Jagan and myself were in the Temple near Palakkad, my wife Sujatha had placed an order for our lunch with one Agraharam Foods at Coimbatore. The facility provided lunch sans rice but they had forgotten to mention those details in the whatsapp message sent to her. She had unsuspectingly placed the order and had also collected the food and come home. Meanwhile we had completed our pooja and darshan by 10:30 AM itself and gone to a neighboring house for our breakfast. Rakesh and his friends had organized it from a vegetarian canteen. The Temple authorities gave us each a pot of rice from the ' Chatti Pooja ' . We had received it by 10:30 AM itself and meanwhile my wife Sujatha was yet to place the order for lunch. The rice had reached me by then and lo the same was had with our lunch on my return to Coimbatore. Post breakfast , Jagan and myself returned home. Sujatha opened the lunch parcel and was surprised to note that it did not have rice. She called up Agraharam Foods and they stated that rice was never offered in the parcel but they had forgotten to mention the same that day. However, the ' Chatti Pooja ' rice pot was there with me. My wife Sujatha, son Madhav Balaji and myself had our lunch with the rice from the Temple and the other items from Agraharam Foods. Sujatha and myself were pleasantly surprised. It was a miracle. The IKYAMATHYA PUSHPANJALI had blessed us with complementary actions. Our roles had been complimentary in life and the deity Errattakulangara Bhagavathy had proved it through this act of hers. Both of us called it a miracle and I informed Rakesh about this. He was super thrilled. Krishnan & and his son Prasanna of Agraharam Foods came to know about this and they planned a visit to this Temple. All of us understood the power of ERRATTAKULANGARA BHAGAVATHY through this miracle.

We were very happy to see a picture of ' Bharatha Matha ' in the residence of Krishnan Nair, our breakfast host. Srrenivasan, Vijoy , Shankaran Kutty ( Oracle ), Jayakrishnan and Govindan Unni had indeed had a very nice time and we are grateful to Bhagavathy for giving us this opportunity.

It is definitely possible to create a heritage stay at Pulinelli. This will be a fulcrum for the visitors who wish to take a tour of the temples found in Palakkad district. This facility can also showcase the biodiversity, food diversity, arts and crafts of the region. It will go a long way in making Kerala a real God’s own country. Such initiatives will add to commerce, but it will be under the head “Cultural Commerce ''. This can hopefully be the first micro religious tourism initiative in India. The Palakkad temple circuit can make an auspicious beginning at Pulinelli Village. Said Lord Krishna to Uddava `` By installing a deity of the Lord, one becomes the King of the entire Earth. By building a Temple for him the person becomes the Emperor of the three worlds. By worshiping and serving the deity, the devotee goes to Satyalok, the residence of Lord Brahma. By performing all the three of these activities, one achieves a transcendental form ". Therefore let us all offer some of our money and resources for the forthcoming Kumbabishiskham of the ERATTAKULANGARA BHAGAVATHY TEMPLE. The details are given below.

( Please note that due to recent changes in the Bank IMPS Transfer is Not possible currently. Kindly Use NEFT Option ). Thilatharpanapuri - A temple to pay tribute to the ancestors KOVIL
A visit to a few temples in Erode

My son Madhav Balaji was super thrilled on learning about our forthcoming visit to Erode. He started preparing his packing pretty early. We bought som... 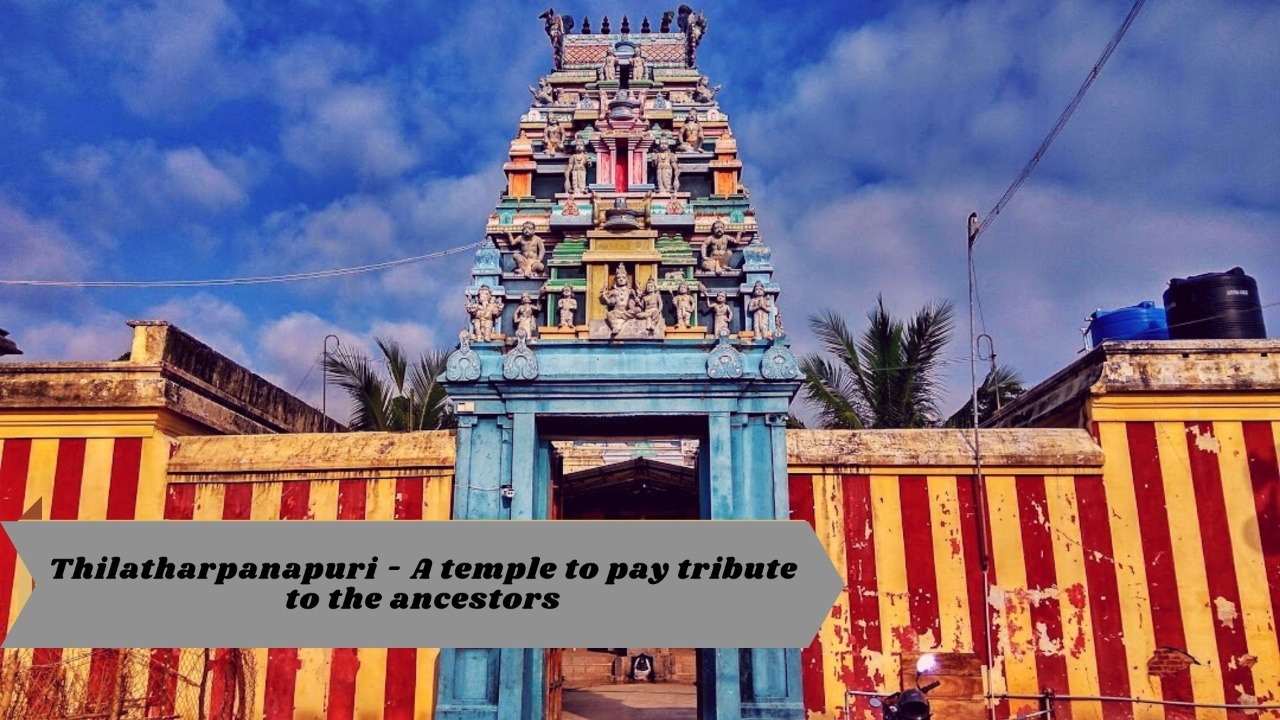 KOVIL
Thilatharpanapuri - A temple to pay tribute to the ancestors

According to Hindu mythology, Ram, in his human incarnation, was performing pitru tharpanams at various locations by erecting four Pindams (pindams...