Sundapalayam is a lush green village on the outskirts of Coimbatore. Folklore states that the village is called so because of the abundance of the ' Sundakkai ' plants that dotted the landscape then. Incidentally Sundakkai is eaten on Dwadashi while breaking the fast that is normally undertaken by the faithful during Ekadashi. The ancient Srinivasa Varadaraja Perumal Temple at Sundapalayam has been the beacon light of Srivaishnavism for over two centuries in this quaint place which is located near Vedapatti. This place was known as ' Aarainadu ' those days. Sundapalayam is also known as Gopalapuram.

The horse shoe shaped Noyyal River valley and the streams connected with the same added to the beauty of the region. Sundapalayam , Srinivasa Varadaraja Perumal Temple made the place sacred and it came to be known as ' Melai Thiruvarangam '. This sacred Temple has been hosting the very special ' Sudarshana Homam ' for over 300 months now. The town people from nearby Coimbatore have been part of this long but fruitful exercise. Jeweller V.R.Vidhyasagar remembers the times when the clothes required were purchased from Mangala Vilas those days. They used to be transferred to his shop before being taken to Sundapalayam. Pandit Sivakumar has been with this team for the last 25 years. His grandfather S.K.Ramasamy Nadar had been the Head Master of the P.S.G School those days.

This lovely Temple had been endowed by a set of devout people. Due to various reasons, some Kannada speaking people had migrated from the Mysore region during the eighteenth century. Similarly some Vaishnavaite Brahmins moved from Thirumalai Sirukunnam to Mysore those days. They had been at Talakad. Another branch went to Kanchipuram and then migrated to Sundapalayam. The Temple was built by this branch of the family. 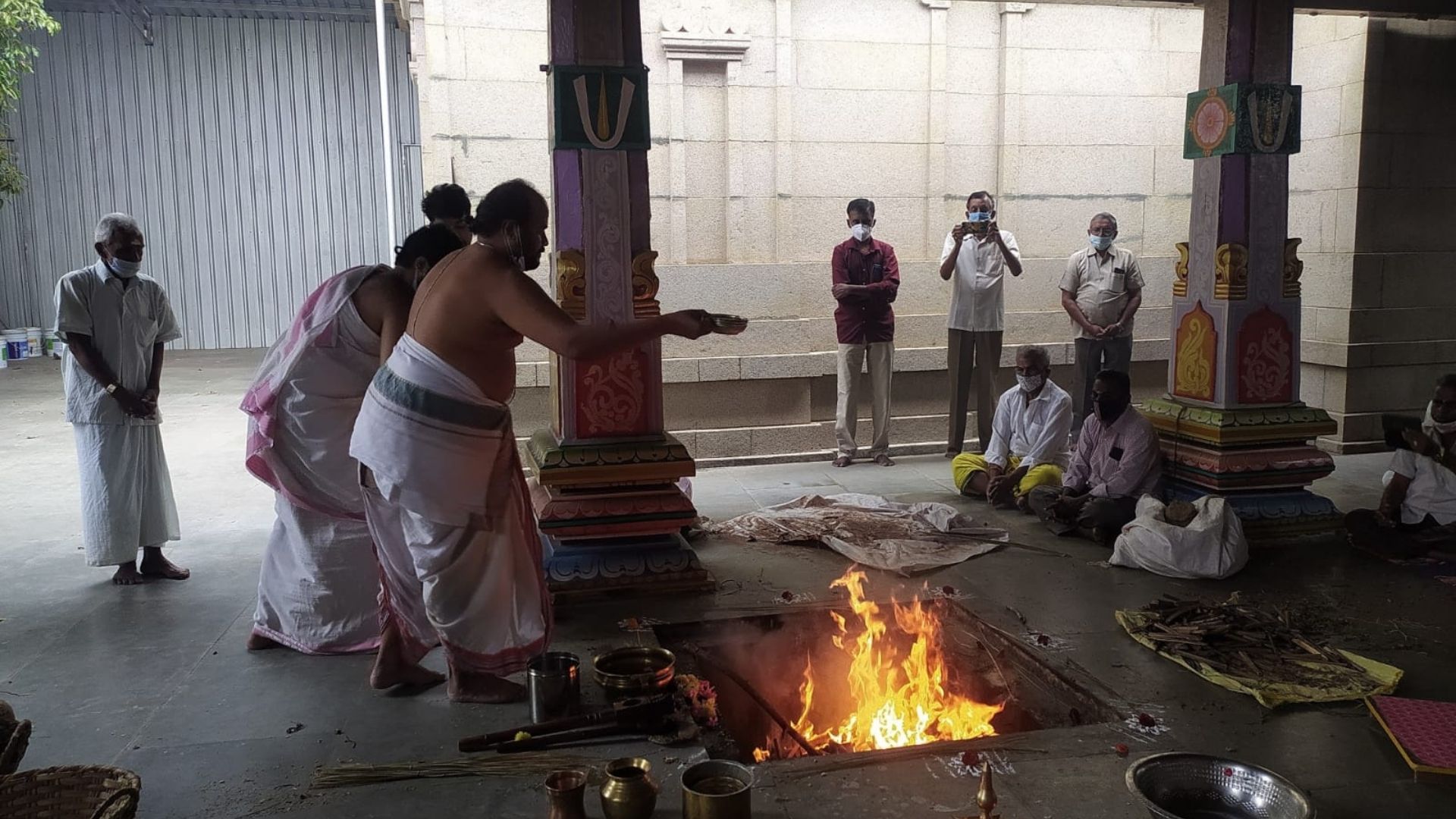 Long ago, the family elder began to build a house. He hit upon a treasure while digging the foundation and he felt that the treasure did not belong to him. Therefore he decided to build a Temple and the deity was known by the name ' Srinivasa Varadaraja ' due to the family's connection with both Tirumala and Kanchipuram. This gentleman put in a bit of his own money for making some ornaments for the deities in the temple. He had also made over some of his personal lands for the upkeep of this institution.

Now, let us go into the origin of the family which built this Temple. These people belong to the Shatamarshana Gotra. Long ago, Periya Thirumalai Nambi ( Sri Saila Purna ) lived in Tirumala and served Lord Venkataramana Srinivasa. The word Nambi in Tamil is equivalent to the Sanskrit word Purna, meaning one who is full of good qualities. Periya Thirumalai Nambi happens to be a descendant of the great Acharya Nathamuni. This Acharya and his grandson Alavandar ( Yamunacharya ) were born in Kattumannarkoil. The Veeranarayana Perumal Temple stands tall at this historic place and the Veeranam tank is located nearby.

The proponent of Srivaishnavism ,Saint Ramanujacharya was born to Kantimati ( sister of Thirumalai Nambi / Sri Saila Purna ) and Kesava Somayaji. The core of Srivaishnavism is Saranagati ( self surrender ). Sri Saila Purna ( known so because he lived in Thirumalai ) transmitted his study of Ramayana to Ramanuja and these efforts culminated in the spontaneous outpourings of the great Ramanuja in his seminal work Saranagati Gadya. This family was also known as the ' Thathacharya ' family because Lord Srinivasa had addressed Periya Thirumalai Nambi as ' Thatha, give me some water '. Of course it is well known that the person who got the treasure was one Lakshmi Narasimha Iyengar. Krishna Iyengar happened to be the son of the Founder and the Temple was managed by Venkatarama Iyengar ( brother of Lakshmi Narasimha Iyengar ) and his descendents. Mahamahopadhya Ramabhadrachariar ( 1840 - 1904 ) and Mahamahopadhyaya Seshadri Iyengar ( 1849 - 1920 ) were the descendants of the Founder and were also the direct disciples of Periyandavar. An icon of Periyandavar has been placed alongside the icons of Nammazhwar, Ramanuja and Vedanta Desika. The entire Temple was redone due to the efforts of G.R.V.Ravichandran of the P.S.G Family.

Srinivasan was the son of Seshadri Iyengar and his son Santhanam was accorded F.R.E.S ( Fellow of the Royal Economic Society ). His seminal book was published by Macmillan and was a text book for post graduates. Vasudevan, the son of Santhanam and Vijayalakshmi have been participating in the management and events connected with the Temple. His relative M.K.Mohan and his wife Geetha have done much in order to revive the traditions. The Founders have recently constructed a nice convention center cum wedding hall in the neighborhood. They wish to use the revenues for the upkeep of the Temple and for also indulging in some charitable activities in and around Sundapalayam. The facility is known by the name Ambuja & S.N.Devanathan Convention Centre. The noble hearted Janaki Ammal had made over her land for the same and hence it is known as ' Janaki Hall '.

Sri Maha Sudarshana Committee has been performing the Sudarshana Homam from 1 - 12 - 1996. Sri Maha Sudarshana Committee consists of the late Krishnakumar, Sathya Narayanan, Ravi, Pandit Sivakumar and many others. The homam is performed on the first Sunday of each English month. The 300 th ( 25 years ) Sudarshana Homam is being celebrated on 5 - 6 - 2022. " We perform the Sankalpam, Nakshatra Preethi, Ashtadikbalaka Poojai is done. The names of the donors and their respective birth stars will be mentioned. We perform the Ganapathy Homam first. Thereafter the others are performed - Sudarshana Homam, Srisukta Homam, Dhanvantri Homam, Maha Mrutyunjaya Homam, Santhana Gopalakrishna Homam and Swayamvara Parvathi Homam. A Purnahuti is done on the completion of the Homams. The Sudarshana Mantra is recited 1008 times(by each of the priests) each time, " stated the well known Astrologer Pandit N. Sivakumar. The Homam begins by about 6:45 AM and goes on till 10:00 AM. Arrangements by the priests begin by about 6:00 AM. The havis happens to be ' Sakkarai Pongal '. " We used to make 45 kilos of Prasadam ( offerings of goods which are distributed ) but post Covid it has come down quite a bit. It will go up once again. We use 7 kilos of ghee for each time and based on offerings it goes up to 12 kilos at times. According to some scientific information about 2 tonnes of Oxygen is generated by each kilo of ghee. Our Chief person who has been conducting the Homam is Ramakrishna Ganapadigal. His team members accompany him and Rajesh from his group has come several times. Our committee consists of 10 members and about 250 members would contribute towards these efforts, " added Pandit Sivakumar.

Let us now understand more about the ancient Sudarshana Homam. Sudarshana is the discus of Lord Narayana. This Homam is associated with him. Homam is a Hindu ritual involving fire. The one who participates in this will be rid of negativity and will be able to win over enemies. Protection from the evil eye is also the other benefit. Importantly devotion to Lord Narayana and his protection will be assured for the devotee. The Homam grants purification and it helps in restoring energy and health. Relief is immediate. Success is for sure. The ones who perform it will be able to help the community better. One gets all the 16 forms of wealth on performing the Sudarshana Homam.

Let us appreciate these do-gooders for this Sudarshana Homam has been helping our region to thrive and grow. Our salutations to Lord Sudarshana. May he bless the members of ' Sri Maha Sudarshana Committee ' with health, wealth and happiness. 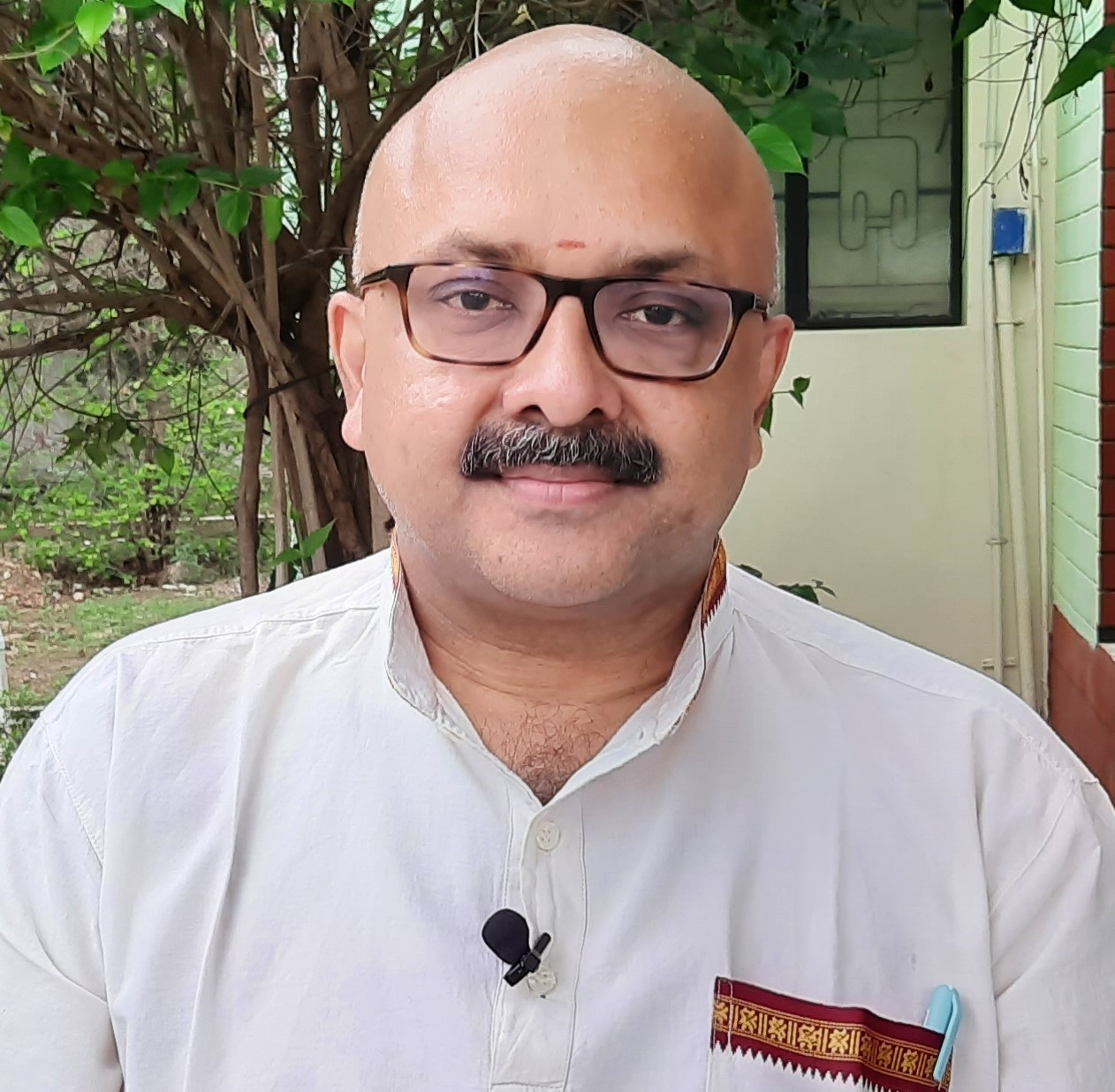